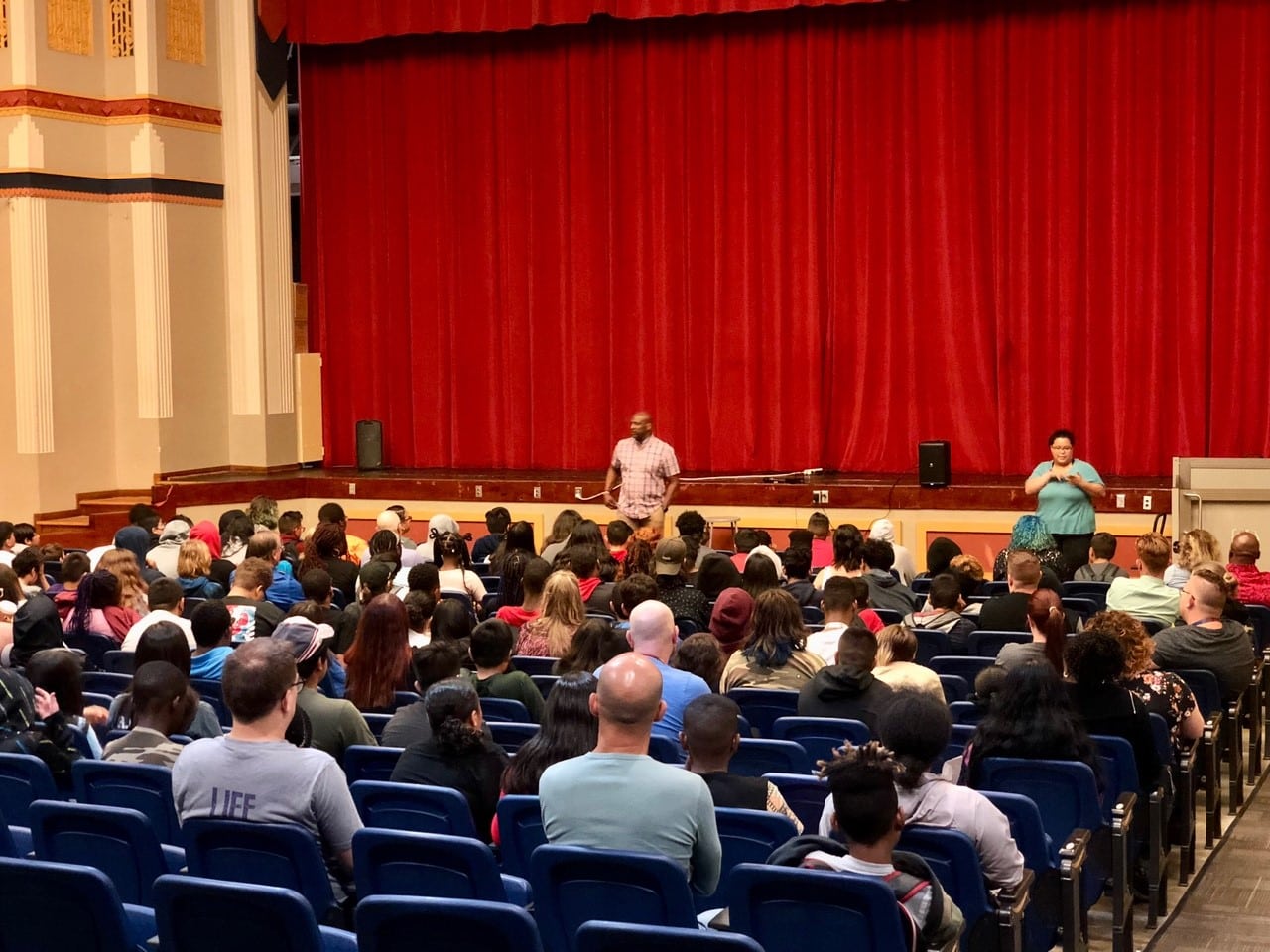 The Boy Who Carried Bricks

It’s not easy to inspire teenagers. As the saying goes, aliens take over their bodies and their minds for a few years and during that time it is really difficult to get them engaged and excited about much. Parents know this. Teachers know this. Alton Carter knows this, but he has the secret ingredient that makes them sit up, put down their phones and listen. The secret ingredient for Alton Carter is just being Alton Carter.
Carter inspired 800 Oklahoma City Public School summer school students attending Taft Middle School, U.S. Grant High School and Star Spencer High School last week. He shared his story with these OKCPS students and again with a group at Ralph Ellison Library as part of the ReadOKC Summer Programming Series, through the generous support of Oklahoma Children’s Hospital OU Health. Every OKCPS student received a signed copy of Carter’s book, The Boy Who Carried Bricks and the younger attendees at the Ralph Emerson event selected books from the ReadOKC On the Go Book Bus, including Carter’s, The Boy Who Went to the Library.
Alton Carter is an Oklahoma native who grew up in extremely difficult circumstances. His mother was a drug addict and a judge declared her unfit to keep Carter and his siblings when he was eight years old. Already traumatized, he spent some years with very dysfunctional and abusive extended family members and then in the foster care system that included two group homes that have long since closed for mistreatment of children in their care.
He behaved in the way so many children who’ve experienced trauma behave. He was disruptive, angry and defiant. He describes doing exactly the opposite of what teachers asked him to do. He shared the story of a 4th grade teacher who got so fed up she kicked him out of her class. A teacher down the hall, Ms. Thompson, took him into her class and treated him better than anyone ever had. He says she treated him much better than he deserved based on the way he treated her. She stuck with him and by him and he’s never forgotten her or the valuable lessons about tolerance, love and acceptance that he learned from her. This is yet another reminder about the value of good teachers.
Carter shared stories about being afraid, alone, isolated and unable to let go of his troubled past, even as a young adult. He shared how over time he learned that carrying that bitterness only hurt him and the people he loved. He had to make a choice to put aside the anger and choose who he wanted to be.
Alton Carter was the first in his family to graduate from high school and he went on to graduate from Oklahoma State University. He has written seven books and travels the country speaking and working with teachers on ways to relate to kids dealing with trauma. His favorite audiences are made up of kids because he wants to use his experiences to make a difference in their lives. Alton Carter being Alton Carter inspired some teenagers last week. And he inspired some adults as well.